The Government of Gombe State has assured residents of their commitment and priority to the education and well-being of every individual in the state.

The government stated this on Monday, August 17 via the Gombe State Public Health Emergency Operations Centre (PHEOC) official Twitter page, while announcing that a candidate who had tested positive for COVID-19 in the state today wrote his first paper in the ongoing West African Senior School Certificate Examination (WAEC) from an isolation centre.

Todaysloaded news Comprehends that the candidate whose name was not revealed wrote his Mathematics paper under the supervision of a watchdog who was fully kitted in a COVID-19 Personal Protective Equipment.

Further findings, however, revealed that the candidate was a final year student of Government Senior Secondary School, Gombe.

The tweet which was accompanied with the candidate’s photograph and his standing invigilator reads; “Health and education are a priority in Gombe State.”

“A final year student of GSSS Gombe tested positive for COVID-19 and was isolated yesterday (Sunday), today (Monday), he is writing Mathematics SSCE while ensuring his invigilator is well protected.” 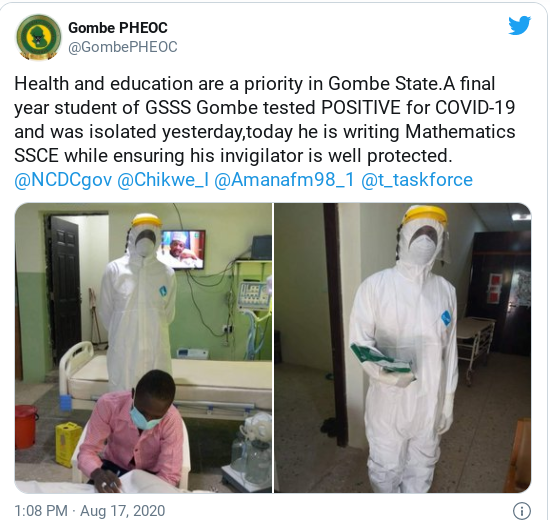 Reacting to the development, the Director-General, Nigerian Centre for Disease Control, Dr Chikwe Ihekweazu who was also tagged in the post commended the state government for a good work.

He tweeted; “Good work by our colleagues in #Gombe.

“There are many exceptional colleagues, quietly pushing to make or country work. #Thankyou #keeppushing.”